The grid is a visual structure that lies at the heart of contemporary art. As a graphic component in painting, it came to prominence in the early 20th century in the abstractions of the Russian painter Kazimir Malevich and the Dutch-born Piet Mondrian, who was widely considered the “most modern” artist of his time. In 1912, Mondrian began to create his “compositions” which were paintings constituted by grids of horizontal and vertical black lines in three primary colours. “These basic forms of beauty,” he wrote, “supplemented if necessary by other direct lines or curves, can become a work of art, as strong as it is true.“

The art historian Rosalind Krauss pointed to the emergence of the grid as a critical step in the evolution of modern art. In her canonical 1979 essay “Grids,” she wrote: “In the early part of this century, there began to appear, first in France and then in Russia and in Holland, a structure that has remained emblematic of the modernist ambition within the visual arts ever since. Surfacing in pre-War cubist painting and subsequently becoming ever more stringent and manifest, the grid announces, among other things, modern art’s will to silence, its hostility to literature, to narrative, to discourse.”

The use of the grid evolved over the course of the century. During the late 1950s, artist Agnes Martin began to draw lines that formed organizational sequences constructed on a rational system; it defined her final break from representational painting. At the same time, the grids served as a stand-in for the most basic form of drawing—leaving marks on a surface—and the meditative state of mind the artist sought in the solitude of her New Mexico home. These paintings foreshadowed Minimalism, and were a significant influence on many artists.

The American Sol LeWitt adopted the grid as the underlying element of his artworks which bridged Minimalism and conceptual art. In the 1960s LeWitt started to draw directly on interior walls using the grid as a simplified format that excluded representational images. The wall drawings evolved into a set of precise and mathematical instructions that the artist would have a third party carry out, so that his own hand did not touch the artwork. LeWitt’ s sculptures, meanwhile, drew upon the grid to form spare geometric abstractions that stand in three dimensions—like an Agnes Martin painting that leapt off the canvas.

Far from being a static element, the grid mutated in the hands of different artists to assume a wide array of forms. Gerhard Richter made lively abstractions of coloured boxes; Carl André lay down squares of metal tiles in geometric patterns on the floor; Chuck Close used the grid as a structure to expand photographs into large paintings. Alan Shields, Sean Scully, Mary Heilmann, Donald Judd, Bernd & Hilla Becher and Frank Stella are just a few of the other seminal artists from the period who made the grid their own.

I was compelled to then visit the catacombs beneath Paris that contain the bones of its murdered citizens. The walls are marked with hundreds of messages all expressing the same message ‘The Republic or Death!’ Those 18th century Communard revolutionaries were the forefathers of modern graffiti and went on to invent mass produced lithography that was pasted around the city as a means of vitriolic political protest by speaking truth to power.

Jersey born Wayne Audrain has skilfully extended these ideas further in our next exhibition – Balancing Acts – The Idealism of Geometry – and his current body of work rests firmly within a minimalist or ‘concrete’ tradition. Vocal in its abstract intent yet concordant with the traditional painterly concerns of composition, form, colour, structure and texture. 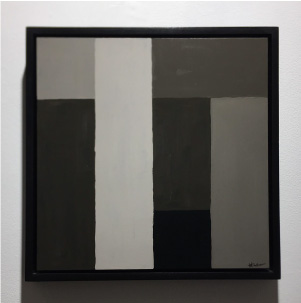